Still in some kind of shock. Can not really grasp that I won, even less how I won it. Usually it is a good idea to write down the race report as soon as possible as not to forget the worst of it. So it will have to be a boring I, I and I race report. I would have written it yesterday night upon returning to I-Falls but the battery was out so I gave up.

At the race start I decided to move up in the field. When Ken shouts “Release the hounds” I moved ahead with the first group. A group of perhaps 10 people. We were moving at a nice speed, a bit to fast. That is, to fast with a pulk. I removed the hat, gloves and opened up the jacket almost immediately. After a couple of miles I realize that there is something wrong with the harness, so I have to stop and “repair” it. After an other hour I stop and repair it properly using safety pins from the bib. In hindsight I had trained way too little with the gear (2). 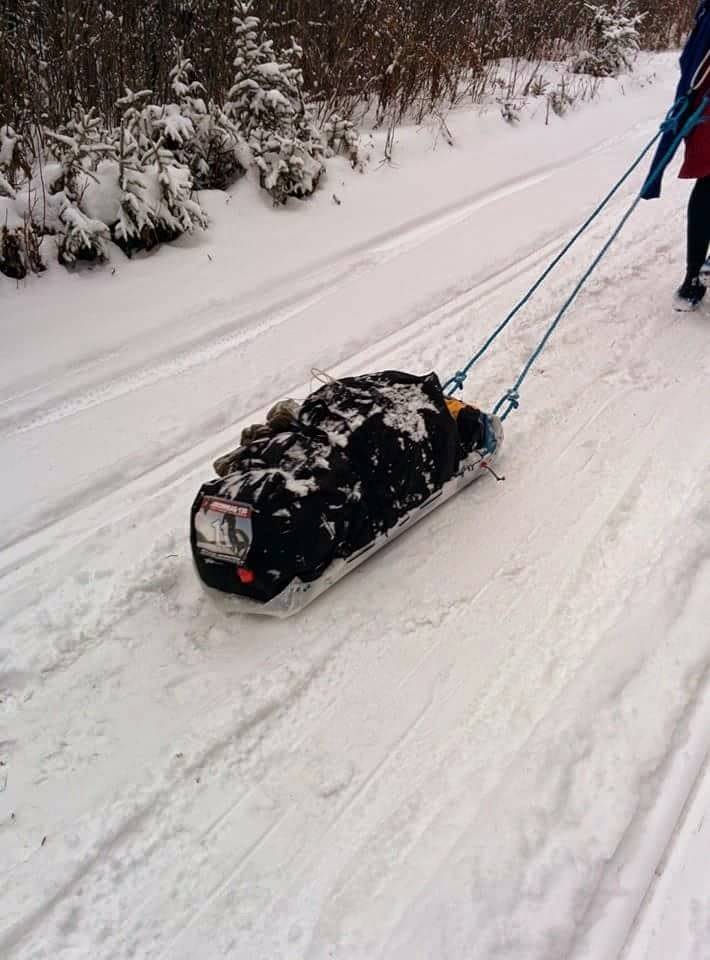 Passed a few runners. Suspected that I was in 2:nd or 3:rd place. Arrived as number two at the first checkpoint, Gateway, 6 minutes after first place. Realize that I will be in first when I exit the checkpoint. Since I don’t like to stop or rather I like it too much. Checklist says fill water/buy food/switch sweater?/feet? I refill the thermos and the bottles, buy tomato soup and coffee, notice that I’m soaking with sweat but decide to deal with that when/if it gets too cold. A long covetous look at the bathroom and I’m out the door (quicker to deal with it in the woods). Leave the checkpoint in first place. A una-bomber look alike shouts “Hej då” when I’ve gotten as far away so I can’t stop and talk to him, very Swedish. I carried those words with me through the whole race.

Meet 4 or 5 other runners heading towards the checkpoint. Gather that I’m about 15 minutes ahead of them, after they’ve made their stop. Number two that was at the checkpoint looked comfortable so I didn’t count on him being any faster out of there (3). Running between checkpoint one and two was fun. It was flat and the legs just kept on turning. Met a girl with a border collie that I stopped and played a little with. The dog that is, not the girl. There wasn’t time for that. When I left them she said “Tack så mycket”. I carried those words with me too. 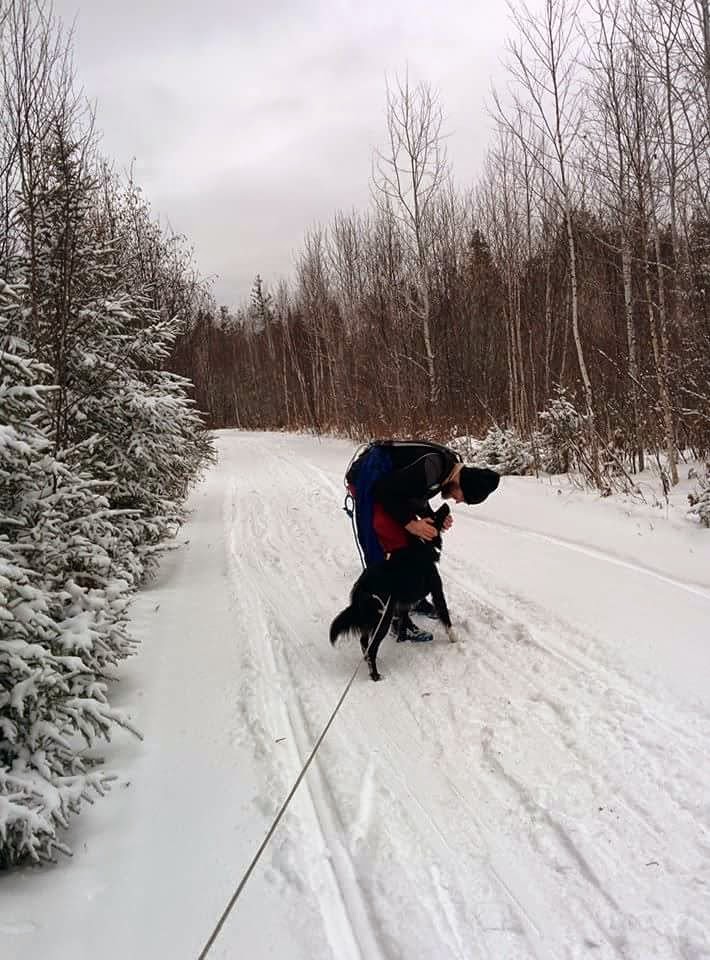 Heading towards the second checkpoint, Melgeorges, you cross a lake that is about a mile wide. I didn’t see any headlamp behind me so I felt comfortable with the lead. A relatively quick stop and away. Met a volunteer that said I’d been in the lead about 30 minutes the whole day. Which wasn’t true. Almost immediately after leaving Melgeorges it started hurting all over and the pulk got heavy. At this point the first half of the race felt like vacation. Decided to listen to music during the night, didn’t really help. Only negative thoughts. And uphills. But then a few really nice downhills came along. Very fun to ride the pulk. Then uphill uphill d-o-w-n-h-i-l-l repeat. Sometimes there was a downhill, but me and the pulk did not move. It is not possible to ride a pulk on pure will, no matter how motivated you are.

The first half of the race is flat. Then almost all of the elevation and at the end a 25 miles slakmota (small incline). I struggled all throughout the night, just waiting for a headlamp to appear behind me. A few did appear but they belonged to bicyclists. Which I later crawled past when they had bivied. Not just a little bit envious of that. I wasn’t crawling but that was the feeling I had. It was me and the wolves. I only saw their tracks though. Just waited for big yellow eyes staring back at me from the woods. So I choose to stare at the ground 2 yards ahead of me. After what seemed like an eternity I started to get near checkpoint three, Skipulk. An older man appeared and wanted to take my picture. He walked with me for a bit. He then told me that his son was right behind me (4), a runner. Lasts years Badwater winner no less. That really got to me. I didn’t think I would be able to stay ahead after that. Did my fastest stop yet at the checkpoint. Filled up with water and got a cup of coffee and away I went. That 25 miles can be that far. Incredibly far. The hills finally disappeared and it turned flat again. A few inches of newly-fallen snow made it worse. Tried to run in the tracks left by the bicyclists.

There were some long straights were I looked more behind me than in front of me, but I couldn’t see anyone. Then all of a sudden there he was. I had to dig really deep in order to get the legs to start jogging again. Started the “emergency”-phone and listened to music, jog two songs and walk three. Didn’t work very well. Although every thing that kept me away from staring at the GPS watch was a win. Nothing happened to the miles. I seemed to stand still. Heading in to the next straight he wasn’t there. Perfect, he is not gaining if I jog four out of ten songs. Then all of a sudden he was there again. Far away, but he had his pulk across the trail. Did he want me to see that he was there? I hadn’t seen him if he hadn’t have had his pulk across the trail. He seemed to be accompanied by a bicyclist. Gaining more and more. I thought long and hard to just sit down on my pulk and wait for them, to give up. But that’s not really an option, you’ll get nowhere like that. Two snowmobiles starts to pass me, I stop the second one and ask her if there is a runner back there. She said there was no one back there. So I start explaining that he has a pulk, much like the one I have. No, no one like that. She was absolutely certain. The relief. Then she says the goal is just over there, pointing afar. Check the watch, says it is about 4 miles left. Hope I’ll be able to finish it in 2-3 hours. The psyche is so weak, had the race been 30 miles longer I wouldn’t have had these problems. Whine, whine that transformed into anger and disgust towards the nature. I was so tired of the snow covered trail and the small crooked crap-trees. Then all of a sudden the hotel appeared, after only one mile. I seemed to remember that someone said that the race wasn’t precisely 135 miles, which makes sense. But it turned out to be a slope behind some crap-trees, the signs for the casino on the other side of the trail was crap-trees too. The last miles was like that. The casino appeared then turned into snow and crap-trees. Found a downhill, after sitting on the pulk for a while not moving. I realized it wasn’t. Had to roll out of the pulk and crawl to a standing position again. Laughed a bit at the one screaming and hissing at the tress. Although it was probably more of a cry than a laugh. Then out of nowhere the casino. Including a sign saying 200 meters to finish. Started to search for the phone to take a selfie with the sign, when I heard someone screaming at the goal. Hobbled up the last little uphill, raised the flag. 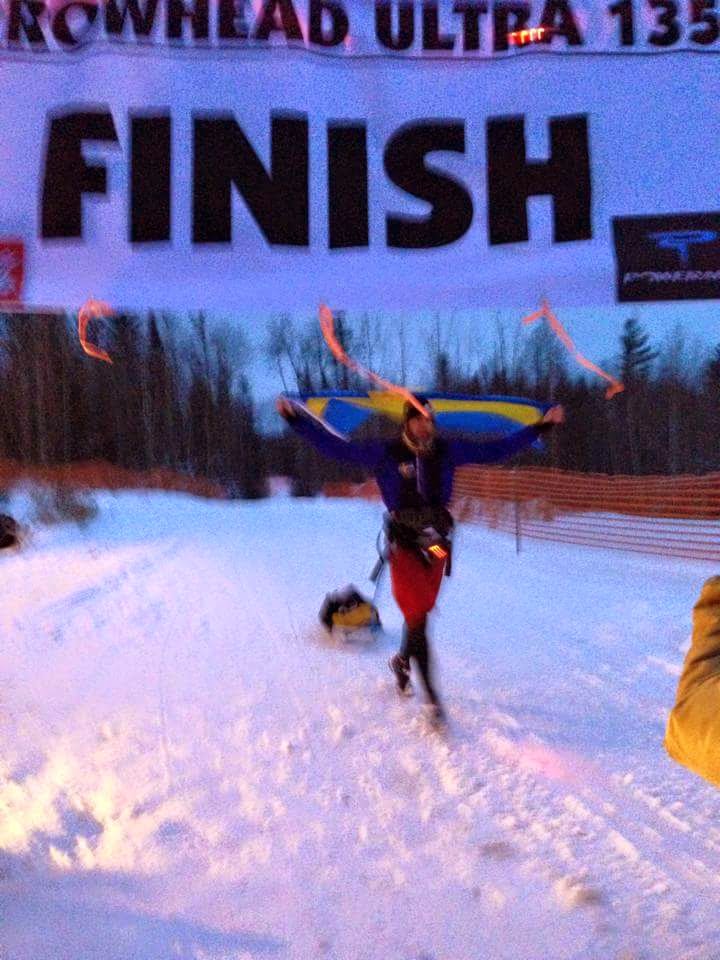 Jag har tillbringat några timmar med att föreställa mig att korsa den mållinjen som första löpare. Inte minst under de senaste dygnen. Men jag trodde egentligen aldrig att det skulle gå. Borde lyssna mer på mig själv. Man skall passa sig för ordet aldrig. Planen var att tävla, men jag packade för I have spent a few hours imagining crossing that finish line as the first runner. Every training session for I don’t know how long. Many a times during the last 34 hours. But deep down I never really thought it would be possible. I should listen more to myself. I should also be careful using the word never. My plan was to compete, but I packed the pulk to finish the race. Used one shirt out of four, did not use any of the three extra jackets or pants. Hats, gloves etc. I really thought the extra pounds would keep me of the podium. Furthermore I had no idea who was in the race beforehand. Which probably was a good thing. I would have been intimidated. As Race director Ken said “a super stacked field”.

Many thanks to C2 safety systems and SAB elektriska for help with equipment, Ateljé Liljeholm/Annika Liljeholm for gear alterations, Aktivut and Fjällräven for equipment loans. Pace gym in Ljusdal for assistance. And all others that have said that they would follow me and/or think of me. Most of you have no idea how incredibly much those few words might mean. Thank you! 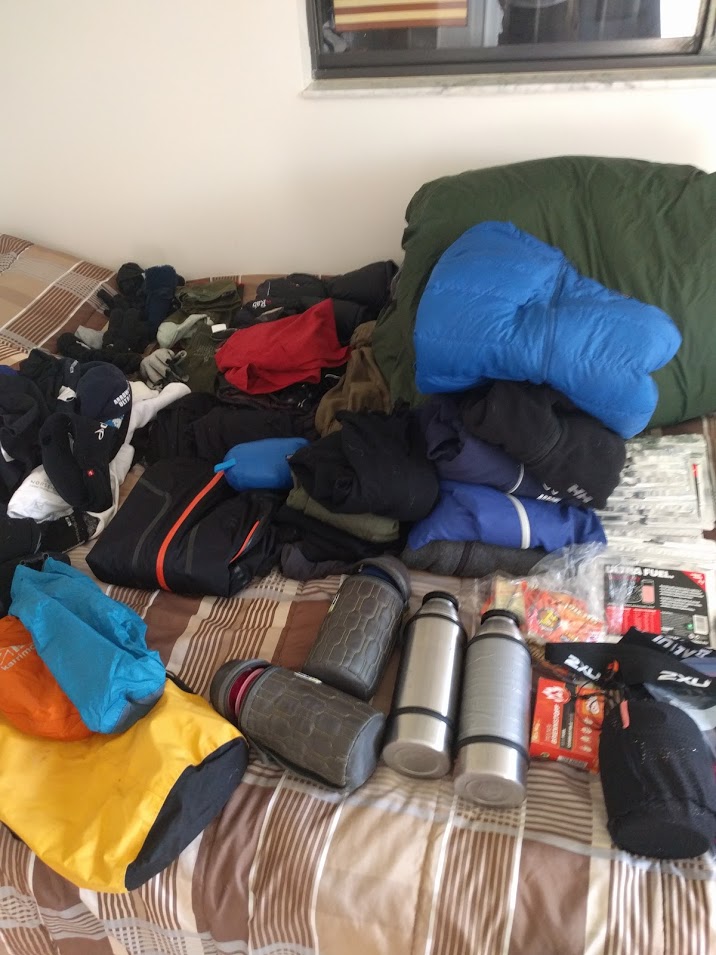 (1) I have changed the quote to almost be a proper quote and not just something I remembered from the original post. Also, John is a 9 or 10 time finisher at this point. Go Back.

(2) I trained with the pulk twice before the race. About 2-3 hours in total. Go Back.

(3) I later learned that he had stomach problems, so he probably wasn’t that comfortable. Go Back.

(4) They were in fact about 3 hours behind me at this point. Harvey Lewis and Jan Kriska had teamed up during the night and finished the race together in second place. They had been about 20 minutes after me at Melgeorges which is what his father, Harvey Lewis Sr, was referring to. I thought he had a GPS on him and that was how Sr knew that he was right behind me. Go Back.